Level of difficulty intermediate to advanced

A young provincial girl lives through dreaming about true love, meeting real love, failure, disappointment, and finally finishes her life as a mermaid.

5 different poems by Alexey Koltsov have been chosen for this cycle, representing themes which are very typical for the Russian folk poetry.

Alexey Koltsov (1809-1842) was a self-taught Russian poet of the Early Romantic period. 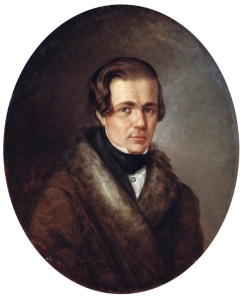 (Look at the Russian texts, Latin transliteration and English translation of the songs from ‘Soul Songs of Provincial Girl’ here.)

While composing the songs, I used some features of the folk songs collected on the river Don and published in 1949-1954 in the famous series ‘Songs of the Don Kazaks’ by A.M. Listopadov. Certain elements of folk music harmony, melody, texture and structure had been borrowed from there.

Each song refers to various stages of developing the main theme, has its own sentiment and resembles different Russian genres. Thus, No.1 is very close to genre of peasant lyrical song of Russian South (as a reference point, I looked for the style of the folk songs collected on the river Don and published in 1949-1954 series ‘Songs of the Don Kazaks’ by A.M. Listopadov); No.2 uses intonations of urban early ‘romance’ (type of Russian classical art song); No.3 is also connected to romance but enriched by polyphonic and polytonal effects; No.4 partially returns to the peasant motives especially those of the calendar ritual songs; in No.5, because of its theme of mermaid’s transformation, much favorable in Russian classical music of 19th century, there are references to the Russian romantic opera style. All songs are composed in tonality, pure, extended or poly-. The different kinds of strophic form (1, 3, 5) or ternary form (2, 4) have been applied.

There are few cases of special technique of voice glissando in the end of phrases (imitating the folk singing) in No.2.

The vocal ranges are the following:

Although meant to be sung as a whole cycle, the songs may have separated performance.

Listen to the songs in computer-generated sound on YouTube:

! This work may be performed. For your inquiry please contact composer Natalia Pispini. In your message, kindly provide some information  (performer’s name or collective’s title, website if any, contact details). The score, parts and the composer’s letter (all free of charge) will be sent to you within a week.

Join me in social media